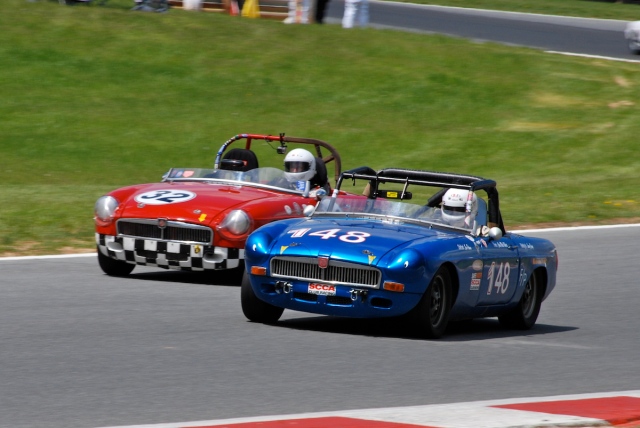 The one-hour ride from the Washington, DC metro-area to Summit Point Motorsports Park was a bit different this year. As everyone can attest, it had been a brutal winter, which then was followed by an equally unpleasant spring. Rain, rain, and more rain had been the weather experienced in the area leading up to the 2014 VRG Jefferson 500. Just in time though, the rainy weather cleared and the early morning Saturday drive to the track was marvelous. The road to Summit Point wound through the beautiful West Virginia countryside leading to Charles Town and beyond. The excitement and anticipation was building as I entered the paddock. I could sense the electricity in the air. Finally we’re racing again at the Jefferson 500. For me, summer had arrived.

Peter Krause, VRG Driving Instructor and Group 6/Sports 2000 Competitor, described the atmosphere at the track perfectly. During the Saturday evening Jefferson 500 post-dinner comments he stated, “This is what club racing used to be like”, adding “This event celebrates the cars and the people.” That paints the perfect picture of the Vintage Racer Group and their events. VRG has continued to grow and develop their series, and in particular The Jefferson 500. The series continues to attract a cohesive community of enthusiasts.

A full calendar of Group Sprint races, enduros, and special events highlighted the weekend. American Sports Car legend, John Morton, served as the Jefferson 500 Grand Marshall. John was the featured speaker at the Saturday evening dinner that was held in a spacious white tent located just off of turns 7 and 8. John entertained the audience with stories from his career, but most notably had the crowd laughing with his down-to-earth wit and humor. He began his comments by describing his racing experiences at Summit Point. He then sculpted his remaining time around his most asked questions; How did you get your start in racing?, What is your favorite track?, and What is your favorite car? This led to stories of his career beginnings with Carroll Shelby, and his love for racing at Le Mans. He listed a long roster of cars that he had driven in his career, but could not narrow his favorite to just one. Ultimately he chose four stand-outs in his career; the Scarab, Datsun 510, Datsun 240Z, and the Group 44 Jaguar. It was an enjoyable and entertaining trip down memory lane with an American racing legend.

When focus and attention returned to the track, VRG put on quite a show of car and driver. Sunday’s action began with a special Sports Racer 2000 race. Peter Krause (Durham, NC) #91, driving his 1984 Tiga SC84, took the win. Ben Sinnott (Fairfield, CT) held an early lead, but Peter’s relentless pace proved too much for the field of eleven competitors.

Next up on Sunday’s schedule were the cars and drivers of Group 6 (Charlie Gibson Trophy). Ralph Manaker (Marshall, VA) #3, led from start to finish in his classic yellow 1969 Chevron B16. Ralph finished fifth during the Saturday sprint race which was won by Ben Sinnott #5, driving his menacing, flat black, 1991 Lola T90/91. Group 6 never disappoints. The racing was fast, furious, and fantastic.

The track was still smoking hot when the the competitors of Group 7 (Phil Hill Cup) took the green flag for their Sunday sprint race. Thomas Frealich (Marathon, FL) #10, driving a blue and white, 1979 March Super Vee took the lead on lap four and held on for the win. Scott Fairchild (Powhatan, VA) #20 stormed away from the field for a dominating victory in the Saturday race. His 1978 Zink Z-10 was untouchable.

The Sunday morning schedule of races finished with a Group 8 (Bill Scott Cup) battle. Ralph Salomon (Katonah, NY) #98, methodically moved up from third position, to second, and then took the lead for good on lap five. He piloted his 1960 Elva 200 fj to an impressive win.

During the lunchtime break, charity rides were given in support of High Performance Heroes. HPH is a group of dedicated individuals from the racing community that have donated their time and talents to develop cars for combat wounded veterans in order for them to pursue their racing dreams. The Friday track walk conducted by Peter Krause also raised funds for this wonderful organization. This is a fantastic organization that truly needs our continued support and thanks. You can learn more through their website; www.hpheroes.org.

Track activity began after lunch with the second of the Brian Redman Enduro races. Both Friday and Sunday’s races were won by Jim Freeman (New York, NY) #17, driving the fan favorite, 1967 Matich SR3. In the Sunday race, Jim took the lead on lap 2 and never looked back. Ben Sinnott kept up the pressure throughout, but ultimately the strength of the throaty Matich won out.

The group sprint races then made their return with Group 3 (Marlboro Cup). The Sunday race was stopped early with a black flag due to an incident on the front straight involving Matthew Roberts (Egg Harbor, NJ) #48. His 1979 MGB rode the turn 10 curbing then pitched the car toward the inner wall, dislodging the tire barrier. Thankfully Matthew stepped from the car on his own and was tended to by the ever-present safety crew. Todd Reid (Elkton, MD) #1, was declared the winner in his 1967 Lotus Super Seven. On Saturday, Michael Clifford (Hopewell Junction, NY) #95, won the race driving his 1965 Ginetta G4.

Up next was Group 4 (Lola Cup). This race was also black-flagged due to a blown engine and oil on the track. David Gussack (Armonk, NY) #88, held the lead when the race was called. David was declared the winner in his 1963 Triumph Spitfire. The Saturday Group 4 race went the complete distance and was won by Bill Thumel (Virginia Beach, VA) #36, in his 1959 Elva Courier.

It should be noted out at this point that great credit should be given to the marshaling staff, track workers, and safety crew. Their responsiveness throughout the weekend was very impressive. The collective effort by VRG and Summit Point speaks volumes to the strength their continued partnership.

Sunday’s track activity came to a close with a Group 5 (Donahue Cup) sprint race. Greg Miller (Richmond, VA) #4, brought home the win, just as he did in Saturday’s sprint race. His 1962 Morgan 4/4 paced the Group 5 field all weekend.

When covering a race meeting as a writer/photographer, I try not to lose sight of the pure basics and enjoy the race meeting from a fan’s perspective. Every one of VRG’s race groups and race specials provided an interesting mix of cars and race dynamics. VRG has hit the sweet spot. The weekend ended as it began, with an electricity and excitement in the air. Everyone wanted more. Luckily the summer has just begun.