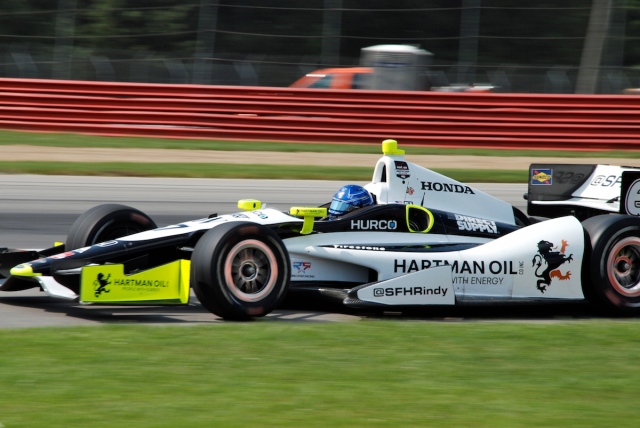 Story and photographs by Terry Johnsen

The Honda Indy 200 @ Mid-Ohio capped a highly competitive and entertaining weekend of racing at the Mid-Ohio Sports Car Course. Scott Dixon (Target Chip Ganassi Racing) once again proved why he is now known as Mr. Mid-Ohio. Starting in the last position on the grid, Dixon sliced his way through the field and captured his fifth win at the track. This was his first win of the 2014 season, and the 34th of his illustrious career.

2014 marked the 30th year of IndyCar style racing at Mid-Ohio dating back to 1980. This may have been one of the most dramatic as well. Because of a wet-track induced spin in the first session of qualifying that brought out a red flag, Dixon lost his best times of the session, regulating him to the back of the pack to start the race in 22nd position. When the race started, an opening lap incident between Tony Kanaan (Target Chip Ganassi Racing) and Marco Andretti (Andretti Autosport) brought out a full course caution. The Ganassi Team utilized this opportunity to put in motion an off-sequence pit strategy for the number 9 car. Dixon then used his smooth driving style and outright pace to move his way to the front. He took the lead on lap 40, holding that advantage until lap 62. On lap 68 he re-took the lead and never looked back. Sebastian Bourdais (KVSH Racing) began the race on Pole Position and would finish in second place. The Pole was the 33rd of his Champ Car/IndyCar career. He snatched the top time from Josef Newgarden (Sarah Fisher Hartman Racing) on a drying track, on the last lap of Fast Six Qualifying.

During the race, Bourdais and Newgarden put on a show for the crowd with their wheel-to-wheel relentless pace. Josef Newgarden became the crowd favorite, as everyone sensed he was positioning himself for a potential first win in the IndyCar Series. As the last pit stop sequence approached, Newgarden passed Bourdais in the Keyhole, to the delight and roaring approval of the fans. He then set his sights on Dixon and was closing in on him. The final pit stops were going to set the stage for a Dixon/Newgarden showdown. Sadly, an air hose became tangled and the air jack for Newgarden’s car faltered for a moment. Those precious seconds made all the difference. Newgarden then ran over a hose when exiting the pit which prompted a drive through penalty. He would ultimately finish in 12th position.

The battle for second then focused on Bourdais and James Hinchcliffe (Andretti Autosport). They would end the race in second and third respectively. Dixon maintained a six to seven second lead, but everyone wondered if he had enough fuel to take him to the finish, though his lap times did not reflect that concern. He maintained a consistent pace and was actually extending his gap from Bourdais. This lead was in part due to the fierce battle between Bourdais, Hinchcliffe, and Carlos Munoz (Andretti Autosport) in fourth position. Their separate battle aided Dixon’s ability to save fuel. So, how close did Dixon push the envelope? After taking the checkered flag on lap 90, he promptly pulled off to the side of the track and stopped. He and his team knew he did not have enough fuel to circuit the track for the cool-down lap. Mr. Mid-Ohio did it again!

The huge crowd that came throughout the weekend also had the opportunity to see many of the future IndyCar stars in action. Supporting IndyCar at Mid-Ohio was the full range of open-wheel development series, to include; USF2000, Pro Mazda, and Indy Lights. USF2000 held three races during the weekend and featured wins by R.C. Enerson (Team E Racing), Jake Eidson (Cape Motorsports), and Florian Latorre (Cape Motorsports). The Pro Mazda races were won by Nicolas Costa (Team Pelfrey) and Garrett Grist (Andretti Autosport). Both Indy Lights races were won by Jack Harvey (Schmidt Peterson Motorsports).

Rounding out the weekend schedule was the ultra competitive Pirelli World Challenge Series. This featured the first appearance at Mid-Ohio of the much anticipated Dyson Racing Team Bentley, Bentley Continental GT3. Simply, a beautiful race car. But the weekend’s featured GT/GTA/GTS races were dominated by Ryan Dalziel (EFFORT Racing) in his Porsche GT3R. Race 1 on Saturday was red-flagged on lap 19 due to a deluge of rain. The race Sunday was completed under beautiful sunny skies, but with the same results. Dalziel and Porsche leading the way. Michael DiMeo (Compass 360 Racing) swept the two TC/TCA/TCB races.

Mid-Ohio Sports Car Course never fails to deliver. Their slogan, “Most Competitive in U.S.”, should also include that it’s one of the most fan friendly as well. Set in the rolling hills of Central Ohio, the beautiful countryside and track amenities offer the perfect backdrop for a classic grassroots style racing experience. The paring of IndyCar and the Pirelli World Challenge provided the fans with non-stop action, and weekend to remember.