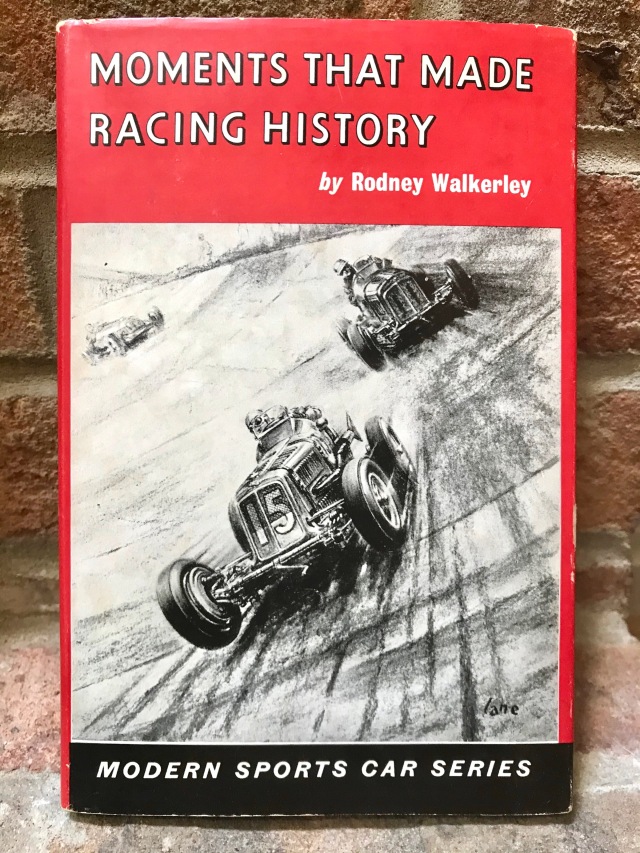 The sixth book in my review series, Moments That Made Racing History by Rodney Walkerley, was found in the window display of a small antique store I was visiting for the first time. It caught my eye immediately, and was clearly a case in which you COULD judge a book by its cover. Something just told me this was the style of book I had been looking for, and I was right.

Virtually all of the events described in the book were new to me and I was captivated by the flavor and style of Walkerley’s vivid race descriptions. I was very familiar with the final story, as it told of the heroic drive by Juan Manuel Fangio at the Nurburgring in 1957; a gripping tale of his tenacity and will to win, driving his car beyond the limits thought possible for the treacherous 14-mile German circuit. He famously stated afterwards, “I will never drive like that again”. This performance is one reason why many consider Fangio to be the greatest driver of all-time.

The exciting stories in the book are also accompanied by numerous historical photographs, and handsomely crafted illustrations (see cover photo) by George Lane, long-time artist for The Motor magazine, from the 1930’s through to the 1960’s.

Moments That Made Racing History has inspired me to learn more about historic racetracks such as Brooklands and Rheims, along with rekindling my fascination with the history of the land speed record. For being only 111 pages, this beautifully illustrated book is packed with racing drama and excitement. Proof positive that you CAN judge a book by its cover.

Writer/photographer of vintage/historic sports car racing. See you at the track! Unauthorized use and/or duplication of this material without express and written permission from this blog’s author and/or owner is strictly prohibited. Excerpts and links may be used, provided that full and clear credit is given to Terry Johnsen and terryjohnsen.wordpress.com with appropriate and specific direction to the original content.
View all posts by terryjohnsen →
This entry was posted in Book Review, Books, Grand Prix, Historic Auto Racing, Used Books, Writing and tagged Auto Racing, Automotive Journalism, Book Review, Formula 1, Used Books, Writing. Bookmark the permalink.