The Start of Something Good….

On the weekend of March 12-13 (2011), I was able to attend a very special event. The North Carolina Region, SCCA “March Memories” race weekend at Virginia International Raceway was my first taste of racing this year. But this was no ordinary “first” that I was witness to. My long-time friend, Mark Seiler, and his son Ray, had just recently completed road race school….and this was to be their first wheel to wheel competitive race weekend. Weeks prior, when Mark called to let me know the date of the race, I knew I had to be there. He and I go way back. We have covered a lot of miles and have racked up many stories along the way. I certainly did not want to miss this one.

Saturday started at O-dark-thirty for me. I left my house in Maryland and drove to VCU in Richmond to pick-up my son Eric for the beginning of his Spring Break. We then made our way down to VIR, and made it approximately 2 hours before Mark and Ray’s first race of the weekend…the Carolina Cup Pro Series (CCPS) 45 minute enduro. Earlier in the day (prior to our arrival), Mark took part in the qualifying session. Unfortunately it did not go as planned. Morning dew, cold tires, and a little fog all contributed to a spin just before completion of the first lap. Mark watched the rest of the session from up against a tire wall. Car and driver were fine. Lesson learned. This meant they had to start at the back of the pack…the back of a field of 67 cars! I believe it was a blessing in disguise, because it afforded them the ability to set their own pace without having to worry about defending against a over-ambitious fellow competitor going into turn one.

Ray started the Carolina Cup race and quickly became comfortable with the pace.  He soon began working his way forward. Mark took over at half-distance and brought the car safely home for the finish. It was an impressive debut! That night, Mark and his wife Sue (Crew Chief), co-driver Ray, along with Eric and myself celebrated with some seriously good Pizza. It was an awesome day!

Here are a few pictures from the weekend…. 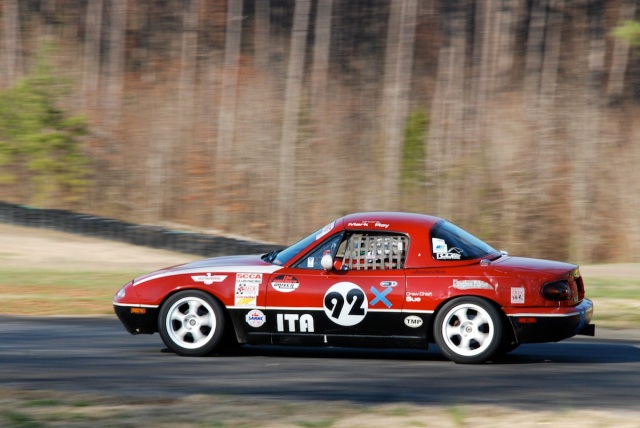 Ray Seiler powering through Turn 12 "Oak Tree" during the opening laps of the Carolina Cup 45 minute enduro race at VIR.

Mark Seiler makes his charge to the finish of the Carolina Cup 45 minute enduro race in their 1991 Mazda Miata "Red". 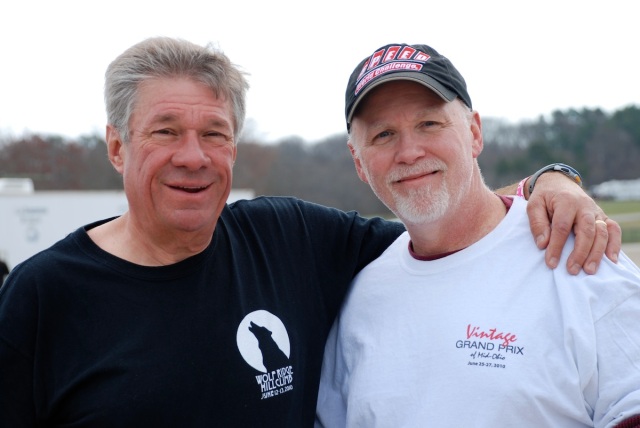