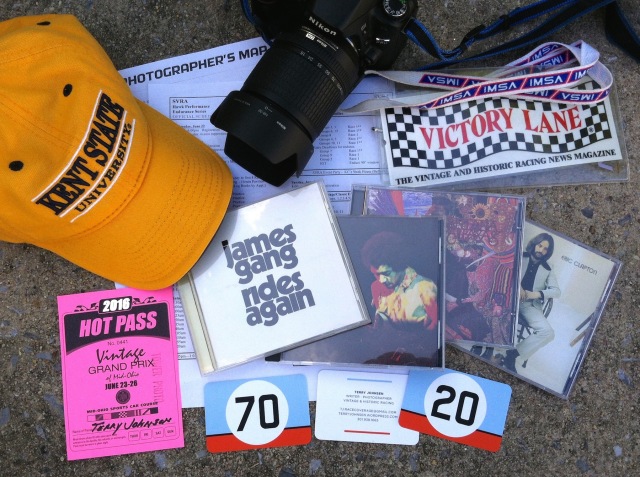 In preparation for the new season, I decided to refresh the blog with a new look, and new designs for my business cards. My son, Eric Johnsen (ericjohnsendesigner@gmail.com, Twitter @EricJ_Designer) incorporated my love for the Gulf Porsche 917 of the early 70’s, with a simple and elegant design. The graphic layout from a previous post illustrates both variations of the front of the card, using the numbers 20 and 70. The #20 is of course my homage to Michael Delaney, aka Steve McQueen, from the iconic movie “Le Mans”. The #70 is in reference to the year 1970. This was a very pivotal and influential year for me as I entered my teen years.

So many memorable things happened in 1970 that made an impression on me. In the world of auto racing it was the year Porsche first won Le Mans. The movie “Le Mans” was filmed at the 1970 event. The release of the movie the following year has since become a cult classic. The Porsche 917 is in my mind the perfect racecar, aesthetically…simple, elegant, and ferocious. The drivers of the #20 in the actual 1970 race were Brian Redman and Jo Siffert. Steve McQueen prepared for the film by racing at the 12 Hours of Sebring with Peter Revson. The underdog entry almost pulled it off, if it hadn’t been for an eleventh hour comeback charge by Mario Andretti in a Ferrari. 1970 also saw Jochen Rindt become the first and only driver to be the crowned Formula One World Champion posthumously. Rindt drove the iconic Gold Leaf sponsored Lotus designed by Colin Chapman. Finally, Al Unser won the Indianapolis 500 in the Vels-Parnelli/Johnny Lightning Special (Colt/Ford). Lightning Bolt livery and all!

1970 also featured some of the most beloved music of my life. Cars and music go hand in hand. Driving is a pleasure, and having the right tunes in your car makes all the difference. The music released in 1970 is for me the most concentrated grouping of influential classic rock I can ever remember. Let me remind you of just some of the music released that year…Derek and The Dominos (Layla and other Assorted Love Songs), Eric Clapton (Eric Clapton), CSN&Y (Déjà vu), The Beatles (Let It Be and Abbey Road), Santana (Abraxas), The Who (Live at Leeds), The James Gang (Rides Again), Neil Young (After the Gold Rush), Stephen Stills (Stephen Stills), Simon & Garfunkel (Bridge Over Troubled Water), James Taylor (Sweet Baby James), Joe Cocker (Mad Dogs & Englishmen), Sly & The Family Stone (Greatest Hits), Jimi Hendrix (Band of Gypsys) and the “Woodstock” movie soundtrack…just to name a few. I defy you to find a year that can match that kind of output. 1970 is all you need for the perfect road trip playlist.

Then there was Kent State, May 4th, 1970. I grew up nearby in the Akron area. I’ll never forget it. It was the year I really became focused on politics and the world in turmoil. Later I would attend Kent State, and most of my core classes were held at Taylor Hall, the scene of the tragedy.

So, as you can see trying to decide on numbers for this project was ultimately an easy choice. Fast forward to 2016, and it was refreshing to get back to the track for the SVRA Vintage Grand Prix of Mid-Ohio. I’m still contributing to Victory Lane Magazine, but will not be doing the race reviews for now. My focus has instead turned to special focus storylines and interviews of my choosing. Stay tuned!  ……..TJ 2016

Writer/photographer of vintage/historic sports car racing. See you at the track! Unauthorized use and/or duplication of this material without express and written permission from this blog’s author and/or owner is strictly prohibited. Excerpts and links may be used, provided that full and clear credit is given to Terry Johnsen and terryjohnsen.wordpress.com with appropriate and specific direction to the original content.
View all posts by terryjohnsen →
This entry was posted in Uncategorized and tagged 1970, Historic Racing, Photography, SVRA, Victory Lane Magazine, Vintage Racing, Writing. Bookmark the permalink.