Better late than never. Finally got this one into the magazine. Enjoy…. 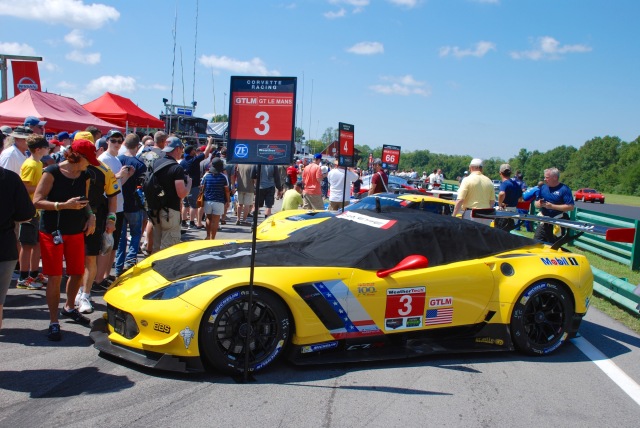 It was a clean sweep of pole position and the race win for the #3 Corvette C7.R driven by Jan Magnussen and Antonio Garcia for Corvette Racing.

The weekend of August 26-28 (2016) proved to be a sports car lovers dream, with a total of five top-notch series battling it out on the rolling hills of Virginia International Raceway (VIR). Along with the headlining IMSA WeatherTech SportsCar Championship series, the weekend agenda featured the Continental Tire SportsCar Challenge series, the Porsche GT3 Cup Challenge USA by Yokohama series, the Lamborghini Blancpain Super Trofeo Series, and The Battery Tender Global Mazda MX-5 Cup series. This was a showcase of the best sports car racing in North America.

Connie Nyholm (CEO/Owner of VIR) and the VIR staff provided the perfect venue, set in the beautiful and picturesque landscape of southern Virginia. This was the first event held at VIR on the newly laid track surface. The track and driving conditions met with rave reviews by the drivers and the teams.

IMSA Radio provided their unique blend of race reporting and commentary. Their coverage provides a running soundtrack for the fans that is unmatched in any form of motorsports. Their knowledge, expertise, and story-telling talents add so much to the fans race viewing experience. The weekend would seem incomplete without them.

In the main event, the GT Le Mans (GTLM) class was going for the overall win. Corvette Racing came into the weekend with a two-race winning streak, and with the #4 car of Oliver Gavin/Tommy Milner holding a small points lead in the championship. The GT Daytona (GTD) field was strong as well, but was down two Porsche entries due to a balance-of-performance (BOP) dispute. Regardless, the Michelin GT Challenge saw a field of 21 cars take the green flag on a beautiful, hot and sunny day.

Since the GT cars were going for the overall win, they were free to run unencumbered without concern of prototype traffic. It was very reminiscent of the early IMSA Camel GT days. This was setting up to be a classic showdown between Corvette and the Ford GTs… and oh by the way, Porsche, Ferrari, and BMW too.

Jan Magnussen in the #3 Corvette C7.R secured pole position. He and his teammate Antonio Garcia were vying for a third win in a row for Corvette Racing. The #4 sister car of Oliver Gavin and Tommy Milner locked out the front row. The #66 Ford GT of Joey Hand and Dirk Muller started in third spot, while the #62 Ferrari 488 GTE of Toni Vilander and Giancarlo Fisichella rounded out the second row.

Magnussen and Garcia set a blistering pace throughout the race while the #66 Ford GT kept them within striking distance. Due to an unexpected heavy rain on Saturday, the grass was particularly slick and loose. Going offline meant heavy pickup of mud and grass, leading to an unscheduled visit to the pits to clear out the debris. Up and down the order, cars experienced this fate throughout the day. What made this trip to the pits more costly was that there were no full-course caution periods throughout the race. That is until there were five minutes to go in the two hour and forty minute endurance race, when Oliver Gavin went off track in his #4 Corvette. This caution period bunched up the field for one last dash to the checkered flag.

Antonio Garcia led the field back to the line for one last lap and was never headed. He and Jan Magussen took the win for Corvette Racing, securing a three-race winning streak in the process. The #66 Ford GT of Joey Hand and Dirk Muller took second spot on the podium for Ford Chip Ganassi Racing. A final lap trading of paint helped the #912 Porsche of Earl Bamber and Frederick Makowiecki secure third spot for Porsche North America. The incident with the #62 Ferrari took it off course momentarily, but enough to drop it down the order to finish in seventh spot. Bryan Sellers and Madison Snow finished ninth overall and first in the GTD class in their #48 Lamborghini Huracan GT3 for Paul Miller Racing.

Did I mention the weekend was hot? It was very hot, humid, and sticky, and it even included a cloudburst of unexpected proportions on Saturday. Still, it was a sports car lovers dream. With the five series on display, there was something for everyone. The weather was hot and track action sizzled. This was indeed a showcase of the best sports car racing in North America.

Writer/photographer of vintage/historic sports car racing. See you at the track! Unauthorized use and/or duplication of this material without express and written permission from this blog’s author and/or owner is strictly prohibited. Excerpts and links may be used, provided that full and clear credit is given to Terry Johnsen and terryjohnsen.wordpress.com with appropriate and specific direction to the original content.
View all posts by terryjohnsen →
This entry was posted in Auto Racing, Historic Auto Racing, Sports Photography, Uncategorized, Vintage Auto Racing, Writing and tagged Auto Racing, Corvette Racing, Endurance Racing, IMSA, Photography, Sports Car Racing, Victory Lane Magazine, VIR, Writing. Bookmark the permalink.