Vintage Racer Group (VRG) may very well be the model for what vintage racing was always intended to be. The members of VRG are a collection of friends, colleagues, fellow racing and car enthusiasts, getting together for fun and camaraderie in pursuit of their combine passion of auto racing. They don’t do this for fame or fortune, but instead choose to spend their time, effort and money to “scratch that itch”, which is racing…even in the face of harsh weather conditions in late November in West Virginia.

2018 has been a challenging year for the racers of VRG. The weather, most notably “rain”, has been their fiercest rival this year. So, for the last event of the season, why not throw more rain into the picture to make the season complete. The traditional VRG Turkey Bowl event took place on the weekend of November 23-25, at Summit Point Motorsports Park. While everyone else was recovering from the Thanksgiving feast and battling Black Friday shopping sprees, these dedicated racers were getting one last weekend of fun behind the wheel. 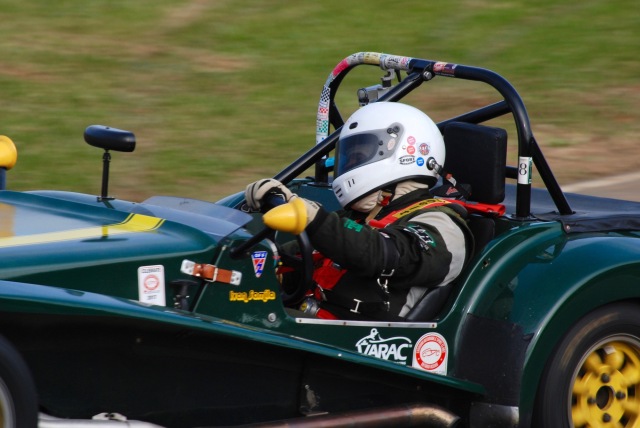 Friday temperatures only made it up into the low 30’s, while Saturday featured wall-to-wall freezing rain. Sunday delivered sunny skies and temps into the 50’s, a nice reward and a fitting end to the season. It’s a testament to the dedication of VRG and their members for coming out and putting on this wonderful event, faced with these extreme and variable conditions.

VRG President, Jim Karamanis, took the time to speak with me on Friday afternoon. When I arrived at his trailer, he had just encountered some serious issues with his 1972 Ford Pinto. But as is the case throughout the world of vintage racing, his fellow competitors responded and were selflessly pitching in to get his car back on the track. It was a wonderful sight to see.

I asked how the Turkey Bowl came to be, and the concept behind the event. Jim noted that it was Joe Blacker and Denny Austin (current member) who first created the Turkey Bowl, 25 years ago. Their idea was to create one final opportunity of the year for racers to come out and have a good time before winter set in. Traditionally there’s been no timing and scoring, and the race grids are set on a first come first served basis. Jim noted that it’s an opportunity to run your tires off, and use up whatever is left from the season. He said it’s different from the VRG Jefferson 500 event at Summit Point, which is more intense. Jim added that there’s no other event like it that he’s aware of, and that VRG took over the running of the event approximately 12 to 13 years ago. I asked him to describe the Turkey Bowl competitor. Jim chuckled and said it’s people that don’t want to do Black Friday shopping. He went on to say that VRG racers view the Turkey Bowl as a chance to see their buddies one last time and swap stories. He said it’s a very laid back atmosphere and that no one is here to win a race, they’re just out here for fun.

Reflecting back on the 2018 season, Jim said they experienced rain at every event, with the Turkey Bowl being no exception. The marquee event of the year, the Jefferson 500, was a total loss due to a severe tropical storm that came up the east coast. Jim explained that the track was flooded, and the carousel section was completely under water. Driving conditions coming in and out of the Summit Point circuit area were also very dangerous, and the only choice was to cancel the event. He went on to say that VRG lost a day in Pittsburgh due to rain, they endured a heavy storm in New Jersey, and experienced significant rain at the Thompson circuit. Jim noted that all these events impacted the bottom-line, but that the hard-core members showed up regardless. He added that VRG is a non-profit, and that they are financially sound. Their rainy-day fund helped to withstand the disappointments.

Looking forward to next season, Jim stated that the 2019 calendar of events would look a lot like 2018, but hopefully with better weather (he said with a smile). He noted that Summit Point and VRG agreed that the Turkey Bowl will move one week earlier, and that the Watkins Glen event would move back one week on the calendar. Jim stressed that the 50’s and 60’s small-bore sports cars are still the life-blood of the series. He stated their Formula Ford program is poised to have another good year, which consistently fields 30 to 40 cars. He noted that there were 50 cars signed up for this year’s Jefferson 500 event, prior to the cancellation. Jim added he’s very excited for the Formula Vee program that VRG has started, and that they’re hoping to see a consistent field of 15 to 20 cars next year.

The biggest news for 2019 focuses on the Jefferson 500. At that mid-May event, VRG and Summit Point Motorsports Park will celebrate the 25thanniversary of the Jefferson 500, along with the 50thanniversary of the Summit Point track. Brian Redman will be on hand to serve as the Grand Marshal. Jim added by saying that VRG and the track are poised to make it a big celebration. I agree that this has all the makings of a grand event!

In finishing, Jim stated that the overall health and reputation of VRG is very good, and that they are committed members in the vintage racing community. He noted that whenever they survey the (approximate 620) VRG membership, the consistent response is “just keep doing what you’re doing”. I couldn’t agree more. VRG is a wonderful vintage racing series, which goes about their business the right way. They stress safe, fair, and competitive racing…with plenty of fun and camaraderie mixed in, and it can all be summed up in the spirit that surrounds the Turkey Bowl. There should be more events such as this for racers to get their last fill, and “scratch that itch”!

Writer/photographer of vintage/historic sports car racing. See you at the track! Unauthorized use and/or duplication of this material without express and written permission from this blog’s author and/or owner is strictly prohibited. Excerpts and links may be used, provided that full and clear credit is given to Terry Johnsen and terryjohnsen.wordpress.com with appropriate and specific direction to the original content.
View all posts by terryjohnsen →
This entry was posted in Auto Racing, Historic Auto Racing, Photography, Sports Photography, Uncategorized, Vintage Auto Racing, Vintage Racing, Writing and tagged Auto Racing, Photography, Sports Car Racing, Summit Point, Vintage Racing, VRG, Writing. Bookmark the permalink.